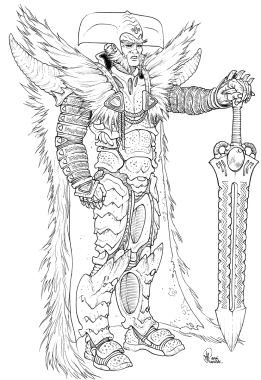 His father, Cerakos II, is killed during the Great Swarming trying to hold off the first waves of kitins to enable civilians to escape to the east.

Leanon, Cerakos' sister, stands in as Regent while Dexton is brought up by his authoritative mother, Lydia.

At the age of 9 Dexton comes under the tutelage of legendary warrior Kalus Hym in from the route of the exodus. The boy takes to Kalus who sets about teaching him the rudiments of battle, of Fyros values, and how to fight kitins.

Kalus takes Dexton with him on a campaign against the kitins. The young Fyros makes the acquaintance of a rebellious, swearing Tryker boy named Still Wyler, two years his senior and who is allowed to partake in battles with kitins, unlike himself. Given his rank and his age, Dexton is refused in-field experience and must content himself with practicing behind the lines to learn the art of war.

On return from the campaign he kills his first kitin. At the age of 12, he is already endowed with extraordinary force and is able to wield his sword with as much dexterity as any common soldier.

While out on a banal hunting expedition with Kalus Hym, Dexton is taken at Oflovak's Oasis by Matis bandits who threaten to slit the boy's throat if Kalus doesn't return from Pyr with the ransom money. But Dexton, using his expertise in close combat, suddenly steps into the Matis holding him, throws him over his shoulder and deftly draws the sword from the bandit's sheath in the same movement. Kalus meanwhile, takes care of the other two bandits in the flash of his great axe. While Kalus is congratulating the boy on his presence of mind, another two Matis spring from behind a tree. Dexton bounds to the side of his master with a warning cry. The boy runs through the nearest Matis to him. But Kalus receives a fatal blow in the back before turning on the last enemy with an almighty blow which cuts the bandit asunder. The 13 year old, refusing to leave his dying master to be devoured by the first scavenger to come along, carries the great warrior over the desert plains back to Pyr. Though near to exhaustion, Dexton refuses all help in carrying his beloved master the last steps to the imperial house where the great warrior is able to die in peace and honor. Since the tragedy Dexton has always harbored a smoldering though controlled hatred for the Matis despite Kalus Hym's last words of temperance and fraternity with regard to all the homin peoples.

During an official visit from the Zoraï'i, Dexton, 18, is introduced to Mabreka, an intriguing Zoraï of 13 and protégé of Hoï-Cho, the Grand Sage. Dexton is soon struck by the Zoraï's calm aura and his in-depth knowledge of the Kamis. Mabreka in return is impressed by Dexton's imposing force and knowledge of kitins. Another significant pretext gives them further reason to strike up a friendship: they had both been saved indirectly or directly from death's jaws by Kalus Hym. Dexton and Mabreka quickly become as good as blood brothers.

War breaking out between the Matis and the Trykers over Lagoons of Loria at last gives Dexton a legitimate reason to avenge the death of his mentor. He immediately rallies a strike force and thunders across Zoraï lands to join forces with the Trykers, despite the Deputy in charge of Tryker operations, Still Wyler, being against Fyros intervention. During his stopover in Zora, Hoï-Cho, then his young friend Mabreka, warns Dexton of the danger of bringing about all out warfare, at a time when the kitins could surface at any moment and so jeopardize the survival of hominity once more. Dexton promises that all bloodshed will be justified, though he will take prisoners if they will willingly lose their honor.

Dexton distinguishes himself in battle as a great leader of homins, worthy of the title of his father and his father before him. But during a lull in the battle he takes the opportunity to hunt some of the fauna in Lagoons of Loria, to take back to the Pyr. While passing through Loria Ponds he falls into an ambush and is captured by a Matis tribe, then delivered to King Yasson at a price. News of his capture finds Pyr. The ailing Leanon asks Hoï-Cho to intervene, but the Grand Sage is unable to make the journey. Instead Hoï-Cho sends Mabreka in the name of Leng Cheng-Ho, Mabreka's father who saved the life of Yasson's son at the cost of his own.

Thanks to Mabreka's intervention Dexton is handed over to the Fyros for 1 million dappers and for the release of Matis prisoners held in Lagoons of Loria.

Dexton is proclaimed emperor at 22 on the death of Leanon and invested with the great Imperial Sword.

Dexton returns a favor by giving Mabreka asylum in Pyr. Dexton becomes more and more in phase with the Kamis, and is highly receptive to the encounters between Ma-Duk and the late Hoï-Cho related by Mabreka.

With Mabreka at his side, again Dexton distinguishes himself as a great warrior emperor in a clash against invading Matis in Sawdust Mines. Dexton escorts Mabreka across the Dunes of Exile back to the jungle lands where the Zoraï takes up the reigns as Grand Sage.

Birth of his son, Lykos.

Fraternity between Dexton and Mabreka is reinforced as they fight together to clear Dunes of Exile and Knot of Dementia of a kitin swarm.

Dexton signs treaty of peace between homin peoples at Fairhaven. The subsequent peace leaves the way for trade and discovery and further insight into the Kami entities.

At 45, Dexton seeks to invest his energy in building up his empire, discovering the truth behind Jena and the Karavan, and further understanding the Kamis and the so-called eternal bliss of Ma-Duk.

Dexton contracts an incurrable disease called the Decline of Enlightenment and his son Lykos stands as Regent of the Burning Desert.

After 5 long, painful years, Dexton succumbs to the malady and Lykos proceeds him as Emperor.

Updated by jaliun over 9 years ago · 4 revisions