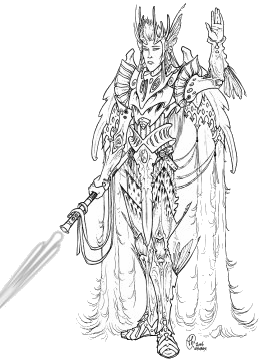 Only son of King Yasson. Born in the Prime Roots during the period of homin exile. His birth gives rise to new hope in the future at a time when spirits are flagging.

The new Matis capital is named after Yrkanis as a symbol of rebirth.

Despite the general discomfort of reconstruction, Yrkanis is given a courtly upbringing away from the general populace and placed under the tutelage of the great organic architect, Lenardi Bravichi.

At the age of 11 the young prince is allowed to accompany his father who had insisted on giving a royal escort to the Fyros border to a Zoraï contingent which had come to pay their last respects to the fallen Matini Roqvini, the great Matis warrior. In Savage Dunes the young prince's curiosity leads him to an alcove where he is given to believe rare plants can be found. But as he approaches the flowers he finds himself suddenly confronted by three Kipucka Kitins. By chance the great Zoraï warrior, Leng Cheng-Ho is at hand and saves the young prince in extremis but at the cost of his own life.

Briefly meets Mabreka, Leng Cheng-Ho's son who has been sent to negotiate the release of the Fyros emperor, held captive by King Yasson. Mabreka is able to ease the prince's mind as to the death of Leng Cheng-Ho explaining that, by saving the prince, his father died in merit and has thus moved further on along the pathway of the eternal bliss of Ma-Duk.

King Yasson is assassinated, Jinovitch his younger brother accedes to the throne. Yrkanis is urged to leave the idyllic world of the court and takes to the forest with a handful of loyal followers. In the strength of his learning from Bravichi, Yrkanis takes to his new life in the wilds with surprising ease. He soon learns the lie of the land, the ways of the common Matis, and to cut his own meat! Traveling mostly incognito, he uses his sense of persuasion and sound reasoning to rally Matis folk under his banner. He gains further popularity in stealing the ever increasing tithes from royal soldiers to give them back to the poor. Theses tithes are used by Jinovitch to finance the army and consolidate his position in the name of Jena.

After a Matis defeat against the Fyros, Yrkanis makes a bid to capture the crown but fails and is thrown into prison. It is Jinovitch himself who allows for the prince's escape to create a pretext to have the prince killed in flight. But the aged Lenardi Bravichi informs the young prince of the ploy and explains that it was really Jinovitch who poisoned his father. Bravichi helps the prince escape. Three days later the old scholar is burnt at the stake under the pretext of heresy. Yrkanis, then h3. 24, vows to avenge the atrocities of his uncle but for the time being is forced to go into hiding with his band of loyal homins. Again he makes his presence felt among the common people where he is able to witness the fear induced by the reign of Jinovitch. Meanwhile, Jinovitch claims he has evidence to convict Yrkanis of heresy and issues a warrant for his immediate arrest.

Yrkanis is finally caught in an ambush. On the way to the Matis capital, renamed Jino, he escapes thanks to his band of hearty homins but this time is given no choice but to leave the Matis lands. To further legitimize his own reign, Jinovitch declares that the 'heretic' prince is dead and offers up the disfigured body of a partisan as proof. Yrkanis is led through the Prime Roots by a Tryker of the Guild of Try then given refuge in Fairhaven by the newly elected governor, Still Wyler, a staunch enemy of the new Matis regime. In Fairhaven, Yrkanis and Wyler plan to muster a force to protect Lagoons of Loria and bring down the Matis dictatorship.

Yrkanis is required to find refuge in Zora. The Tryker deputies would never accept the presence of a Matis prince in Fairhaven while Governor Wyler is out on a campaign across the lake lands trying to stir up a fighting spirit among the people. Yrkanis strikes an agreement with Mabreka whereby trade would be resumed as soon as the prince recovers the Matis throne. In return the Zoraï Grand Sage agrees to help him pass Matis supporters through the Prime Roots to the jungle lands to build up an army. Yrkanis learns about the Zoraï ways though never once his belief in Jena falters. However he does agree to forbid the persecution of the Kamis in the forest lands once he comes to power.

Yrkanis' followers risk their lives spreading the word throughout the Matis lands that Prince Yrkanis is alive and will soon come to rid the forest lands of the reign of terror. They tell that the liberators will wear the Bravichi leaf, avenging streaks and the mark of fervor on their faces.

In response to the Matis invasion of Lagoons of Loria, renamed Jino Waters, Yrkanis leaves Zora with an army to join Still Wyler at the frontier.

On recognizing the colors of the house of Yasson, and the painted faces of Yrkanis and his followers, the vast majority of Jinovitch's soldiers drop to their knees in recognition of their true born king. Lagoons of Loria is thus taken with only little bloodshed. Jinovitch immediately marches out from the Matis capital with his great army of elite warriors and conscripts to quash the mutiny and confront what he calls the 'false prince'.

Jinovitch is killed on the way to the frontier. His army, having received the news of Yrkanis, watches on as he is eaten alive by some prowling kitins. Escorted by Wyler to the capital, Yrkanis accedes to the Matis throne at the age of 32.

Birth of his son, Stevano.

His reign has since been one of wise rule built on loyalty to the crown and Jena, trade competition and aesthetic achievement, so bringing the Matis people round to the prized values of Yasson and Lenardi Bravichi. He has promoted peace and signed the Homin Rights Act. However, time and again there has been call from the growing number of radicals within the court for a tougher stance against the Kamis and their followers.

Updated by jaliun over 10 years ago · 3 revisions